The main source for the contents of this wiki, if not otherwise stated, is the information available from the United States Geological Survey.

An earthquake is the result of a sudden release of energy in the Earth's crust that creates seismic waves. Earthquakes are recorded with a seismometer, also known as a seismograph. The moment magnitude of an earthquake is conventionally reported, or the related and mostly obsolete Richter magnitude, with magnitude 3 or lower earthquakes being mostly imperceptible and magnitude 7 causing serious damage over large areas. Intensity of shaking is measured on the modified Mercalli scale. (read more...)

To write a new article, just enter the article title in the box below. (Template)

Not sure where to start? 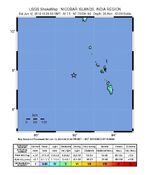 Retrieved from "https://earthquakes.fandom.com/wiki/Earthquakes_Wiki?oldid=6217"
Community content is available under CC-BY-SA unless otherwise noted.